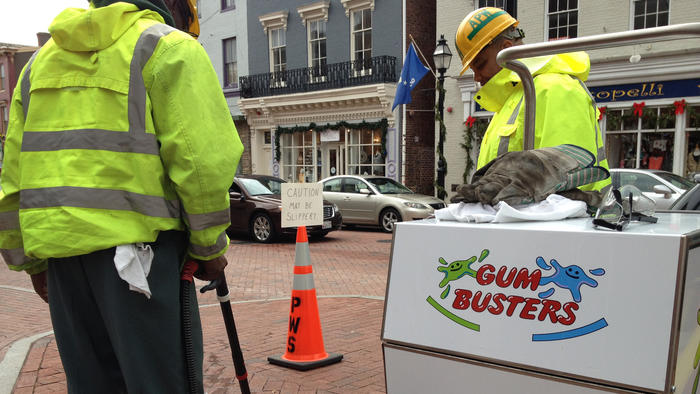 to remove chewing gum from bricks in the historic district. (Baltimore Sun photo by Erin Cox)

Along the brick streets of Annapolis' historic downtown this week, public works employee Kevin Brown deployed the newest weapon in the city's arsenal.

Steam arose from beneath the brass bristles of Brown's contraption as it pulverized the dark, sticky smears flecking the sidewalk at the corner of Main and Francis streets.

Steam arose from beneath the brass bristles of Brown's contraption as it pulverized the dark, sticky smears flecking the sidewalk at the corner of Main and Francis streets.

Now that Annapolis has emerged from a budget crisis, Mayor Joshua Cohen said, he has focused attention on beautification efforts, including a new website for reporting problems with city service and a $17,000 investment in a "gum buster" that Brown used to eradicate chewing gum from bricks in the historic district.

"We're able to focus, really, on what we should be doing on a daily basis," Cohen said before donning a hard hat and taking a turn blasting away gum from days past.

"Downtown is the heart of the city, and if downtown is not doing well, our whole city is having a problem."

When Cohen took office, the city's budget crisis led him to lay off 33 workers in 2010, take out a $10 million line of credit to cover operating costs and shrink the government. This year, the city shut down its trash collection department and outsourced the service to a contractor to save more than $1 million. But Cohen said Tuesday that the city now has a balanced budget and surplus that allows for the two new initiatives.

The Web portal, called "REPORT IT," allows residents to lodge complaints 24 hours a day on anything, from whether a recycling pickup was skipped to a neighbor who owns a backyard rooster instead of a backyard chicken, city officials said. The portal also allows the complainant to publicly track who is working on the complaint and how long it takes the city to remedy the problem.

"The cool thing about it is it's going to be transparent and accountable," Cohen said.

The second project involves the "gum buster," a $6,000 device that required a $17,000 upfront investment, including taxes, shipping and the first supply of bristles and detergent, and will incur about $10,000 worth of expenses every six months to replace the bristles and the environmentally friendly detergent, which was selected with the health of the nearby Chesapeake Bay in mind.

"You'll be seeing it around town a lot more as we're deploying it," said David Jarrell, the city's public works director.

He said the city is considering plans to begin a street-sweeping program that would involve limiting street parking for certain periods.